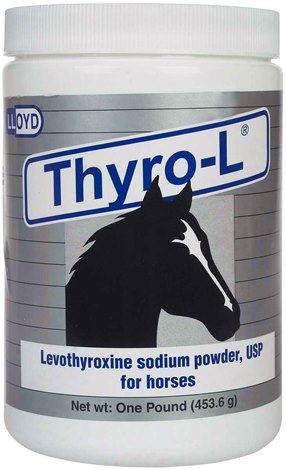 A study done on six Standardbred racehorses associated the use of supplemental thyroxine with cardiac arrhythmia and concluded the supplement also could be a contributing factor to bone fractures.

The results of this study appear in the May 2022 issue of the Equine Veterinary Journal. Janice Kritchevsky, Carla Olave, Stacy Tinkler, Melissa Tropf, Kathleen Ivester, and Laurent Couetil with the Department of Veterinary Clinical Sciences at Purdue University and Lauren Forsythe at the Davis School of Veterinary Medicine at the University of California-Davis conducted the study with funding from the Equine Guelph Centre in Ontario. They initially released the results in September 2020, and the study was first published in 2021.

A cluster of sudden deaths in racehorses associated with trainer Bob Baffert’s barn at the former Betfair Hollywood Park during late 2011 and early 2013 threw a spotlight on the use of levothyroxine (Thyro-L) because it was among the routine prescriptions and supplements the trainer used.

A 2013 report produced by the California Horse Racing Board’s then-equine medical director Dr. Rick Arthur concluded the use of levothyroxine was concerning because of studies that “convincingly associated” hyperthyroidism in humans to cardiac arrhythmias and “functional abnormalities.” Arthur also noted, however, that discussions with a number of veterinarians found “prescribing thyroxine without evaluating thyroid levels is consistent with the standard of care for prescribing and dispensing thyroxine at the Thoroughbred racetracks in Southern California.” He also pointed out that Baffert said he had been using the supplement for more than five years with horses stabled at other tracks because he thought the supplement helped “build up” his horses, so Arthur could not conclude it was a definitive factor in the horses that died at Hollywood Park.

During the investigation of the sudden deaths, Baffert said he had stopped using Thyro-L altogether.

Arthur said in the report that levothyroxine in sedentary horses had been shown to be safe but another study had concluded further study was needed to determine whether it was “a safe treatment in horses that are facing physiologic challenges such as exercise or pregnancy.”

The University of Purdue and UC-Davis study was a step toward shedding light on levothyroxine’s effect of competing racehorses.

This study showed levothyroxine treatment associated with arrhythmias in three of six horses in the study and in all cases when the horses were receiving the highest dose. In two of the horses, no arrhythmia was detected prior to a standardized exercise test on a treadmill, but it showed up during exercise, and then was resolved 40 minutes after exercise. In the third horse, the arrhythmia started during exercise and persisted for several hours afterward. The irregular heartbeat did correct itself within 24 hours in the third horse.

Because the exercise regimen occurred on the final day the horses were supplemented with levothyroxine, the study does not show the impact on arrhythmias if the horses continued to be supplemented and exercised.

To conduct this study, the researchers used three female and three gelded Standardbreds ranging in age from 4 to 9. They were all conditioned for five days per week for six weeks and blood lactate monitored to establish uniform fitness levels. Each horse received three levels of levothyroxine treatment: nothing, 0.1 milligram/kilogram, or 0.25 mg/kg. Which horse received what level of treatment during each round of treatment was determined randomly. The treatments were also packaged by a pharmacist who prepared coded bags with the powdered levothyroxine mixed with dextrose powder so it was unknown during the study which horses were receiving what concentration of the supplement.

The dosages used were two times or five times higher required than what is required to achieve a normal serum concentration. They were selected because the treatments resulted in thyroxine concentrations similar to those “found in post-race samples of horses with suspected or confirmed atrial fibrillation,” as seen by the Ontario Racing Commission veterinarian. One of the concerns about levothyroxine use is that it is not regulated by most racing and performance horse jurisdictions, so there is no way to determine how much supplementation is occurring.

Besides the effect seen on cardiac muscles, the study’s conclusion notes that hyperthyroidism has also been associated in humans with decreased mineral bone density and an increased risk of fracture.

“Musculoskeletal breakdown is a major problem in horse racing, and ensuring that horses do not compete if they have elevated blood concentrations of thyroid hormones could remove hyperthyroidism as a potential contributing factor to catastrophic injury,” the study noted. “Certainly, much more research on the effects of iatrongenic levothyroxine administration on musculoskeletal health is needed.”