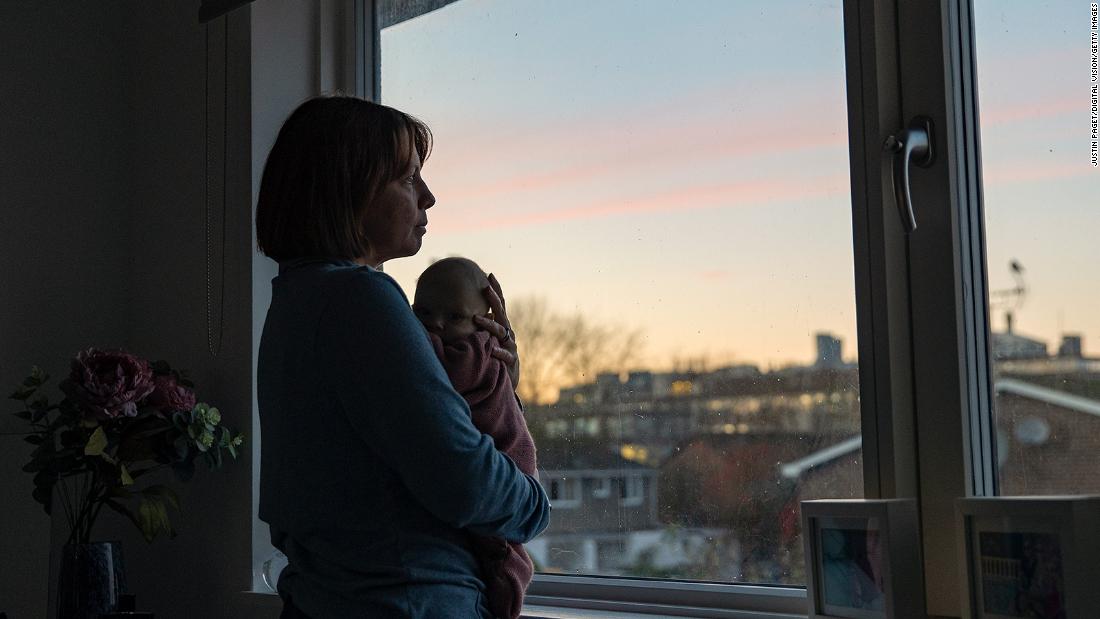 Yet these conditions, known as perinatal mood disorders, remain largely misunderstood by the public and healthcare providers alike, said experts at a roundtable discussion hosted by CNN’s gender reporting team As Equals.

The conversation started with panelists saying that the number of women affected by perinatal mood disorders is likely to be much higher than one in 10, and they unanimously agreed that the issue remains neglected by health services worldwide.

“There is still this pervasive concept that mental health considerations are a luxury,” said Simone Honikman, founder and director of the Perinatal Mental Health Project in Cape Town, South Africa.

She went on to explain that a woman’s mental health not only impacts her physical health but also that of her child whether directly or indirectly because when suffering with a mental health condition, she may not seek other health services that are crucial for her or the wellbeing of her child.

Kazione Kulisewa, a consultant psychiatrist at Kamuzu University of Health Sciences in Malawi agreed that mental health takes a backseat compared to the other physical conditions, but explained that in countries such as Malawi, where there are multiple competing health priorities and very limited resources, it is even harder to push for investment in maternal mental health care when there are such high rates of HIV and maternal mortality. (In Malawi, 10% of women aged 15-49 years were estimated to be living with HIV in 2020 and the southern African country has one of the highest maternal mortality rates globally, with 439 maternal deaths per 100,000 live births. In the US this figure is 23.8 per 100,000.)

Despite these challenges, Kulisewa was emphatic: “Mental health conditions, when untreated, cause a bigger burden than some of the infectious diseases,” he said.

The repercussions of this neglect of perinatal mood disorders are vast. A World Health Organization (WHO) study found that women with postpartum depression were twice as likely to suffer from depression four years later and were significantly more likely to experience chronic diseases. Studies have also shown links between the mental health of mothers and the health of their children.

For Jen Schwartz, CEO of Motherhood Understood, a US-based organization that connects and educates women on perinatal mental illness, the biggest concern is stigma and a lack of awareness.

Schwartz herself suffered from severe postpartum depression and anxiety following the birth her son nine years ago and remembers feeling uninformed, isolated and ashamed. She believes that by not educating and supporting women more openly about mental health conditions during pregnancy and motherhood, “we’re not preparing women to know what to look for and to know that something’s wrong.”

“The fallout from that, I think, is tremendous.” said Schwartz, explaining that the resulting isolation leaves women feeling unable to speak out about how they’re feeling. “You don’t speak out and you suffer in silence,” she said.

A lack of informed professionals — at every level

The experts also acknowledged a lack of professionals working in the sector, such as perinatal psychologists and therapists who specialize in maternal mental health, but also midwives and antenatal care providers with knowledge in this area, so they know what to look out for. As an example, Kulisewa pointed out that there were just three perinatal psychiatrists in Malawi, which has a population of 19 million. CNN was unable to reach the Ministry of Health in Malawi to confirm this.

However, there was also unanimous agreement on the panel that community-based organizations are also crucial.

Dr Prabha Chandra’s team at the National Institute of Mental Health and Neurosciences in India worked with women and communities in the state of Karnatika to test various interventions with mothers, as well as talk to husbands and mother-in-laws about what depression and anxiety look like — as these relations play a big role in the wellbeing of new mums in India.

Chandra stressed the need for culturally appropriate ways of raising awareness of maternal mental health such as simplified methods of diagnosis and locally produced films and materials that take into account local sensitivities and communicate in ways people understand.

The need for systemic change

Having established the numerous challenges: limited resources, a lack of qualified staff, consistent data collection the world over, competing public health needs, enduring stigma and shame, inadequate understanding of the scale and impact of the problem both among policymakers and the wider population, the discussion moved to consider solutions — and ones that would be bring about systemic change.

A key part of the solution is to better integrate maternal mental health services into the existing health infrastructure of a country, such as antenatal services or child development programs. Many on the panel said this integration was essential so that funding or support for maternal mental health services were not dependent on political support and could survive changes in leadership, which the world over results in shifts in public health priorities.

This integration has been achieved in many high-income countries, said Jane Fisher, global health professor at Monash University. “There is public recognition, but it has taken substantial investment in public education, health care, professional education and the building of tiered services,” she said.

But it will be some time before this will be achieved in low and middle-income settings.

Another important solution proposed was the need to adapt the standard tool used globally to screen for mental health concerns in the perinatal period, the Edinburgh Postnatal Depression Scale, was created more than 30 years ago. The WHO states the scale should be used as a starting point and not a means of diagnosis, and the roundtable experts agreed, but they said that a universal test like this does not work well in practice.

“There’s a great need for tools to be developed out of country specific context using local idioms,” explained Honikman. She described the Edinburgh scale as being too long and complicated for use by busy midwives who see thousands of women and thought the idioms used were inappropriate for the communities her team works with. As a result, they have created their own shorter screening tool in three local languages.

In terms of other solutions, others spoke of the need for increased awareness and mental health literacy among the public, politicians and healthcare providers to have a real impact, and finally, more funding and financial support.

A final point raised by Chandra and others was the opportunity for prevention. If risk factors for maternal mental health conditions are addressed by health systems early on, you may be able to prevent the onset of the disorder. These risk factors include poverty, domestic violence, and childhood trauma and are likely to be higher in countries which rank lower on the gender equity index, like India, explained Chandra.

“If you reduce domestic violence … and reduce poverty in families, you can achieve far more in terms of reducing mental health problems than a million psychiatrists will ever do,” said Alain Gregoire, co-founder of the Global Maternal Mental Health Alliance.

Over the course of 1.5 hours, the various experts spoke passionately about the needs of new mothers and expressed their frustration that more isn’t being done to address maternal mental health already given what is known about its prevalence and the necessary, often simply steps, required to reduce it.

If you or someone you know might be at risk of a perinatal mood disorder, here are ways to help.

Story of the week

Grassroots feminist organizations, especially those led by women of color, Indigenous women and other marginalized communities, need to be listened to and supported.

Written by Adie Vanessa Offiong
Corazon Aquino was the first female president of the Philippines (1986–1992) and in this role she brought democracy back to the country, following a long dictatorship under Ferdinand Marcos.
Aquino was born into a wealthy and politically prominent family. In 1954, she graduated from Mount St. Vincent College in New York City  and married Benigno Simeon Aquino, Jr. a journalist and budding politician who would later be jailed by Marcos and assassinated in 1983 after returning from exile in America.
When Marcos unexpectedly called for elections in 1986, Aquino was the unified opposition’s presidential candidate. While Marcos was named as the elected president, Aquino and her supporters challenged the results and both parties held rival inauguration ceremonies on February 25, 1986. Marcos soon lost support and fled the country, resulting in Aquino taking office. That year, she was also named TIME magazine’s Woman of the Year.
One of the first things Aquino did was appoint a commission to write a new constitution, as Marcos had abolished the previous one in 1973 in order to stay in power. The constitution was ratified in February 1987 and elections were held to appoint a new Congress. During her presidency, Aquino also broke up the economic monopolies enjoyed by Marcos’s cronies.

But Aquino was criticized for not making basic economic and social reforms, as well as political corruption, while the country faced widespread poverty. This led to a decline in her popularity, and hostilities between the communist insurgency and her military are thought to have worsened these problems .

After Aquino left office in 1992, she continued to use her voice and spoke out against homelessness and violence in the Philippines. She started a foundation supporting vulnerable Filipinos to start small businesses and supported social projects in poor communities, including rescue centers for street children.

Other stories worth your time

“My own definition of a feminist is a man or a woman who says, “Yes, there’s a problem with gender as it is today and we must fix it, we must do better.” All of us, women and men, must do better.”

The panelists at the CNN As Equals maternal mental health roundtable discussion:

Dr Prabha Chandra, head of perinatal mental health at the National Institute of Mental Health and Neurosciences in India

Katayune Kaeni, incoming Board President at Postpartum Support International and a Clinical Psychologist in the United States

After his brother died by suicide, this teacher changed how he talks to students about mental health

After his brother died by suicide, this teacher changed how he talks to students about mental health

Consider This from NPR : NPR