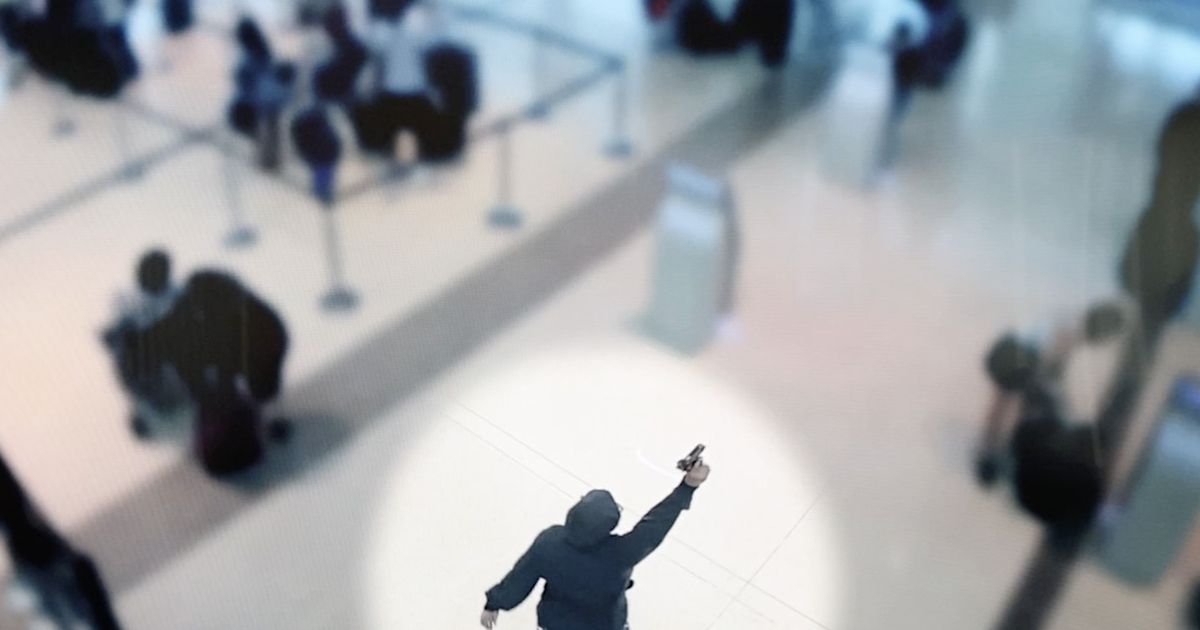 Dallas County commissioners were warned last month the county faced a crisis: A yearslong waitlist for beds at the state’s psychiatric hospitals prevented people from getting proper mental health treatment.

Dallas County District Attorney John Creuzot said the woman who opened fire in Dallas Love Field airport this week is a “perfect example” of the predicament he warned county commissioners about.

“There’s no way to know what an outcome would have been on this, except that we are plagued with systemic problems for people like this, low-level offenders who are incompetent to stand trial,” said Creuzot.

Portia Odufuwa, 37, faces a first-degree felony charge of aggravated assault of a public servant. Police Chief Eddie García said Odufuwa pointed a gun toward Dallas police Officer Ronald Cronin after he shouted commands for her to drop her weapon. Cronin shot Odufuwa in her lower body.

The Dallas Morning News recently reported Dallas County’s average wait time for a state psychiatric hospital bed is longer than any other urban county in Texas, according to state data. Creuzot said earlier this month that the wait times can surpass the maximum sentence of some misdemeanor charges, compelling prosecutors to dismiss cases.

Odufuwa has cycled through courts in Dallas and Collin counties in recent years and her mental health was frequently at the forefront of those cases. Last year, she was arrested on a misdemeanor charge of pulling a fire alarm in Mesquite when there wasn’t a fire. A Dallas judge ordered her to outpatient treatment, meaning she was released from jail and was supposed to report for services like counseling. But she failed to show up, prompting her re-arrest. The judge ultimately dismissed the case in November.

A lawyer, Alison Grinter Allen, who does not represent Odufuwa but reviewed the case at The News’ request, said judges likely order outpatient treatment because of long wait times for inpatient treatment.

“It used to be the wait for the hospital was two weeks and with a good hospital wait, she could have been stabilized,” Allen said.

‘Afraid for my life’

Odufuwa was arrested in April 2019 after a bank robbery in Wylie. She was found incompetent and the case was dismissed in May 2019.

Defendants who are found incompetent, meaning they can not assist in their own defense or identify participants in the courtroom such as the judge, may undergo counseling and sometimes medication to restore them to competency. Legal proceedings pause until the person is deemed competent.

Five months later, in October 2019, Mesquite police arrested Odufuwa after she said she set a house on fire and was “God’s prophet.” But mentally ill people gravitate toward fire and are prone to claiming responsibility for things they didn’t do, Allen said.

To proceed with a case, prosecutors need proof a fire was arson and that a specific person started it, Allen said.

Creuzot told The News Odufuwa was not prosecuted because there was a lack of scientific evidence.

Nearly a year later, in September 2020, her mother, Portia Timmons, applied for a protective order. Odufuwa wasn’t taking her medication for schizophrenia and bipolar disorder, her mother wrote.

Had the protective order been granted, she would have been prevented from having a weapon. But the weapon she used at Love Field was not registered to her, Dallas police said. It is not clear how she got the weapon. García, the city’s top cop, said Tuesday that Odufuwa has an outstanding traffic warrant from New Mexico that prevented her from buying guns at least two times since 2016.

Her family declined to be interviewed.

Timmons wrote she was “afraid for my life” in her application. Odufuwa told Timmons she was not her mother, Timmons wrote.

“Today Portia Odufuwa said that I was wearing her mother’s close (sic),” Timmons wrote. “She is not seeing [me] as her mother. She sees [me] as a spirit.”

The case was assigned to Judge Jill Renfro Willis’ court, but her office said Judge Rayburn Nall, a retired judge who sometimes presides over Collin County court cases at the request of sitting judges, reviewed the case while she was unavailable. He denied the protective order, according to Willis’ office. Nall could not be reached Tuesday.

State law requires a finding that family violence has occurred or is likely to occur for a protective order to be granted. It is unclear what evidence was presented to the judge besides Timmons’ application.

Days later, Odufuwa was arrested for falsely pulling the fire alarm in Mesquite on April 25, 2021. She was found incompetent June 3, 2021, and ordered to Parkland Hospital’s behavioral health services outpatient program. She was released, likely to a boarding house or a relative’s home, Allen said.

But it appears she fled the home, Allen said, because court records show on June 11 a judge issued a warrant for her arrest. She wasn’t re-arrested until October.

At this point, prosecutors and the judge had to make a tough decision, Allen said.

Odufuwa already showed she wasn’t going to succeed at outpatient treatment. She could have waited in jail until a space opened for treatment. But the wait could last years, longer than the 180 days state law allows a person to be confined for a misdemeanor case.

Or, the judge could drop her case. On Nov. 9, prosecutors asked Dallas County Judge Kristin Wade to dismiss the case, and she did. Wade did not respond to a request for comment.

“They were basically denied the opportunity to send her to the state hospital because of this backlog,” Allen said.

Odufuwa was again arrested in May of this year. She was accused of trespassing in Wylie. The status of that case is unclear.

The waitlist for state psychiatric hospitals is nearly 2,500 people long, according to the Texas Health and Human Services Commission. More than 950 people are waiting for maximum security beds, and more than 1,500 are in line for non-maximum slots, per state data.

On average, people spent about 511 days on the maximum security waitlist and 232 days waiting for non-maximum beds, according to numbers from September 2021 to June 2022. The wait in Dallas County can be longer.

Shooter at Dallas Love Field once said she was ‘God’s prophet,’ wife of singer Chris Brown

“We’re kind of stymied by the fact that we can’t get people to the hospital,” Alyse Ferguson, chief attorney for the Collin County Mental Health Managed Counsel, said. The program helps people with mental illness stay out of the criminal justice system and get into treatment.

In a June Dallas County Commissioners Court meeting, Commissioner John Wiley Price gave a presentation about the increasing wait times for state hospital admissions. Creuzot told the court after the presentation that the population of those determined to be incompetent has grown too large to solely rely on dwindling state hospital beds.

He said those accused of misdemeanors wait in jail, without a trial or receiving resources determined to be necessary for competency restoration.

“This is exactly the kind of problem that I was telling them about — without being specific about this lady — that we’re in a crisis,” Creuzot said Tuesday. “She fits the category of what I was talking about when I went to the commissioners that day.”

Price, who oversees the county jail and behavioral health committees, said Odufuwa’s story is typical for many with mental health diagnoses and criminal accusations.

About 400 Dallas County inmates are waiting for a state hospital bed, 72 of which are accused of misdemeanors. He said he worries about those people falling through the cracks, because they likely won’t be admitted into the state hospital before the maximum time they could serve, if convicted, has passed. Class A misdemeanors have a maximum sentence of a year. Class B misdemeanors are limited to 180 days.

”You can try to get them get them into some of our programs,” he said. “But other than that, backs are against the wall. The law does not allow us just to just continue to keep them.”

Felony defendants, Ferguson said, don’t have a restriction on how much time they can sit in jail, and most will go to a state hospital despite an excessive wait.

A 2017 study by the Treatment Advocacy Center, a national nonprofit, graded Texas an “F” for efforts to decrease recidivism among people with serious mental illness who have committed major crimes. The report faults the state for its “few meaningful safeguards in place to enable [them] to succeed in the community, whether they are being released from corrections settings or discharged from hospitals.”

Elizabeth Sinclair Hancq, a co-author of the study and the center’s director of research, called it a “revolving door” where people with mental health diagnoses get trapped in a loop of hospitalization, incarceration, then homelessness.

“When individuals don’t receive the care that they need, they often cycle in and out of these systems, and it’s really a symptom of the lack of attention and gaps in our health care system that these individuals fall through the cracks and then get stuck in the system,” she said.

Dallas Love Field bounces back to normal one day after shooting

Because Odufuwa’s prior cases were dismissed, a judge or jury never determined her guilt or innocence.

“Even if we could’ve snapped our fingers and made her competent to stand trial, that doesn’t mean she would not have been there that day,” Creuzot said. “We don’t know if she would have been found not guilty by reason of insanity. We were unable to get that far because of the law.”

“Her process will start all over again,” Creuzot said.