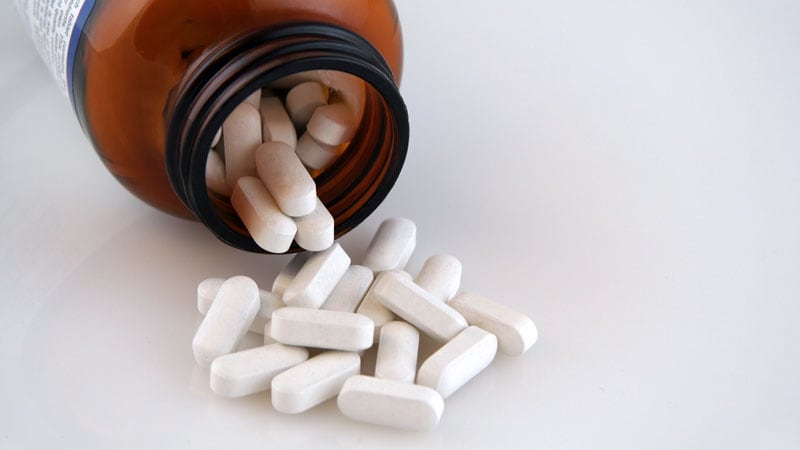 Oral calcium supplementation was associated with lower survival and a greater need for aortic valve replacement in elderly patients with mild to moderate aortic stenosis, a new study finds.

“Our findings suggest that supplemental calcium in this population does not confer any cardiovascular benefit, and instead these relationships should be thoughtfully considered in light of growing evidence and concern for cardiovascular harm particularly with unnecessary supplementation,” the authors conclude.

The study was published online in Heart on April 25.

The researchers, led by Nicholas Kassis, MD, Cleveland Clinic Foundation, Cleveland, Ohio, explain that aortic stenosis is the most common adult valvular disease in the developed world. Increasing with age, it has a prevalence of 2% among those over 65 years and 4% over 85 years.

The condition is marked by severe calcification causing leaflet immobility and outflow obstruction, a process that occurs over a mean duration of 8 years and leads to dramatically increased mortality if left untreated once symptoms develop. With no proven pharmacological therapy, aortic valve replacement is the only treatment modality.

The researchers point out that although it is a disease of the elderly, multiple modifiable risk factors for aortic stenosis have also been identified, including raised cholesterol levels, smoking, and increased serum ionized calcium, parathyroid hormone, and vitamin D3.

They note that use of calcium and vitamin D supplements has risen in recent years, particularly among post-menopausal women susceptible to osteoporosis, but there are limited data on the valvular effects.

The current study included 2657 patients (mean age, 74 years; 42% women) with mild to moderate native aortic stenosis selected from the Cleveland Clinic Echocardiography Database from 2008 to 2016 and followed for a median duration of 69 months.

Of these patients, 49% did not take any calcium or vitamin D supplements, 12% took vitamin D alone, and 1033 (39%) supplemented with calcium with or without vitamin D.

Aortic valve replacement was performed in almost half of the patients taking calcium, compared with only 11% of those not taking any supplements.

The risks of all-cause and cardiovascular mortality were also higher in patients supplementing with calcium who did not undergo aortic valve replacement.

When stratifying by osteoporosis status, the differences in rates of survival and aortic valve replacement persisted between the groups.

“Strengthened by its large sample size and extended follow-up period, our study suggests that calcium supplementation does not confer any cardiovascular benefit, and instead may reflect an elevated overall risk of aortic valve replacement and mortality especially in those not undergoing aortic valve replacement,” the authors say.

In an accompanying editorial, Jutta Bergler-Klein, professor of medicine and cardiology at the Medical University of Vienna, Austria, notes that calcification is the cardinal process driving a vicious cycle that propagates aortic valve stiffness and obstruction.

Dysregulated phosphate calcium metabolism is a major determinant in the development of aortic leaflet sclerosis and calcified aortic stenosis, as triggered by impaired renal function, and in primary or secondary hyperparathyroidism, she reports.

“Identifying susceptible risk factors for valve calcification, which might be modified by noninvasive measures, such as targeted medication or dietary changes, instead of the purely mechanical surgical aortic valve replacement approach, is highly desirable,” she adds.

Bergler-Klein points out that osteoporosis and lower bone mineral density have been associated with faster progression of aortic stenosis (AS), but in the present study, the mortality increase with calcium supplementation was independent of the osteoporosis status at entry.

She says the safety of artificial supplementary calcium intake has to be considered “in an individual and careful view,” and that evaluation of underlying cardiovascular disease and risk factors should be taken into account when considering the prevention and treatment of osteoporosis. Visualization of cardiovascular calcifications should be included in osteoporosis imaging modalities when deciding when to give only vitamin D or also additional calcium.

“In patients with calcific AS and high-risk CV, the present study strongly adds to the evidence that long-term continuous calcium supplementation should be avoided if not mandatory,” she concludes.

This study was supported by unrestricted philanthropic support to the Cleveland Clinic Heart, Vascular, and Thoracic Institute. The authors have disclosed no relevant financial relationships.